× Unsupported Browser: Some features may not work properly in Interent Explorer. Please use one of the supported browsers - Chrome, Firefox, Safari, Microsoft Edge.
When autocomplete results are available use up and down arrows to review and enter to select.> search

The Highway Safety Improvement Program (HSIP) is a Federal-aid program designed to reduce traffic fatalities and serious injuries on all public roads, including non-State-owned roads and roads on tribal land.

Every state department of transportation (DOT) is required to submit to the Federal Highway Administration (FHWA) a Highway Safety Improvement Program annual report that:

The safety performance analysis in the report describes the state trends in the federal safety performance measures (and others if desired), established targets, the basis for the targets, and how the targets support the State’s Strategic Highway Safety Plan (SHSP) goals. The FHWA evaluates the state HSIP reports and determines that a State DOT has met or made significant progress toward meeting its safety performance targets when at least four of the targets have been met or the actual outcome is better than the baseline performance. If FHWA determines that a State DOT has not met its targets then the State DOT must obligate the HSIP funds apportioned in the previous year to only HSIP projects and submit a HSIP implementation plan.

WisDOT has developed targets with the goal of reducing crashes in all measures by 2%. The baseline for 2022 targets is the 5-year average for 2016-2020.

The 2021 MnDOT targets were established based on a trend from the 2019 outcome to the Strategic Highway Safety Plan goal for 2025 of no more than 225 traffic deaths and 980 serious injuries. 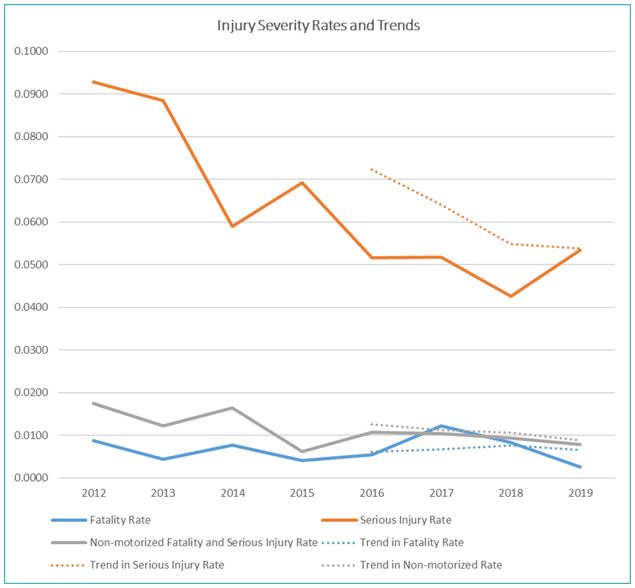